When does Elden Ring Release?

Elden Ring has been DELAYED to release on February 25th of 2022. The original release date of January 21st was announced during the Summer Game Fest 2021, and the delay was revealed via Twitter on October 18th 2021

When will Elden Ring Gameplay be Shown?

On February 10th 2022 New Elden Ring footage was distributed by press participants of a hands-on session. You can check more information here

An Elden Ring Closed Network Test was performed during November 2021 where players had the opportunity to test out the game.

Elden Ring Gameplay was revealed to the public during an event on November 4th 2021, after which Preorders for the game were opened and a collector's edition was announced.

Elden Ring Gameplay was privately shown to the press for Gamescom 2021. You can find a full breakdown of all new mechanics on this wiki.

Elden Ring Gameplay was officially revealed for the first time at Summer Games Fest on June 10, 2021. Elden Ring Gameplay was leaked from an internal Bandai Namco trailer on March 3rd 2021. You can find a trailer analysis here. It is expected that some information from the game will surface March-May 2021. If this is revealed, you'll be able to find lots of information and analysis here on the Elden Ring Wiki.

What Platforms is Elden Ring On?

Elden Ring was announced for PS4, Xbox One, PC. It has been confirmed that Elden Ring will be available for Playstation 5 and Xbox One X as a FREE upgrade.

28 August 2021: Interviews and Gameplay demo confirm MANY mechanics, details on Crafting, PvP and Online, Legacy Dungeons, and a lot more.

May / June 2021: Several journalists and known leakers claim the game will be shown one June 10th at the Summer Games Fest on June 10th 2021

Gameplay reveals via a leak of an internal Bandai Namco trailer have shown several aspects of the game, such as:

For a gameplay analysis see this video.

George R R Martin is the On  the New York Times bestselling author of many novels, including the acclaimed series A Song of Ice and One - A Game of Thrones, A Clash of Kings, A Storm of Swords, A Feast For Crows, and A Dance with Dragons. As a writer-producer, he has worked on The Twilight Zone, Beauty and the Beast, and various feature films and pilots that were never made.

Journey through the Lands Between, a new fantasy world created by Hidetaka Miyazaki, creator of the infl uential DARK SOULS video game series, and George R. R. Martin, author of The New York Times best-selling fantasy series, A Song of Ice and Fire. Unravel the mysteries of the Elden Ring’s power. Encounter adversaries with profound backgrounds, characters with their own unique motivations for helping or hindering your progress, and fearsome creatures.

WORLD EXPLORATION IN THE LANDS BETWEEN

ELDEN RING features vast fantastical landscapes and shadowy, complex dungeons that are connected seamlessly. Traverse the breathtaking world on foot or on horseback, alone or online with other players, and fully immerse yourself in the grassy plains, suffocating swamps, spiraling mountains, foreboding castles and other sites of grandeur on a scale never seen before in a FromSoftware title.

Create your character in FromSoftware’s refi ned action-RPG and define your playstyle by experimenting with a wide variety of weapons, magical abilities, and skills found throughout the world. Charge into battle, pick off enemies one-by-one using stealth, or even call upon allies for aid. Many options are at your disposal as you decide how to approach exploration and combat. A free upgrade to the PlayStation 5 version will be available for players who purchase ELDEN RING on PlayStation 4, and SmartDelivery will be supported for Xbox One and Xbox Series X|S.

What We Know So Far 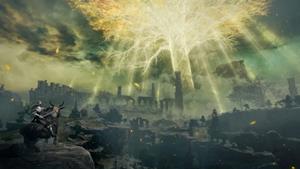 The Lands Between is the world of Elden Ring, and to those who live in The Lands Between were blessed by the Elden Ring and the "Erdtree". Those who were blessed by the Elden Ring are characterized by having a golden aura that can be seen in their eyes. However, at some point, some of those who were blessed, lost their grace, was exiled and labeled as the Tarnished.  As time passed, for unknown reasons, the Elden Ring was shattered across the lands and its pieces were picked up by many of the 6 demigods, where they inherited different powers and have physically changed and twisted due to being corrupted by the power.

The Lands Between is broken into 6 distinct areas that is overseen by a demigod and features a central hub that connects all these 6 areas. According to an interview with Miyazaki, players will have total freedom as to the order they want to tackle for each area, and it is up to the player on how they want to approach it. Apart from that the hub will not be accessible at the beginning of the game, which means you will need to progress the game until you reach the hub area.

According to Hidetaka Miyazaki: "The Lands Between is supposed to invoke this feeling of something that's very mysterious and very ethereal – and we hope that when players play the game, they're going to experience that." 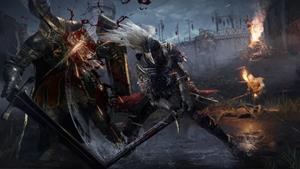 According to Hidetaka Miyazaki in an interview: " I feel like one of the main themes of the game is how the player, the Tarnished, approaches or treats this new-found grace and this return to the land that they were once banished from, how they interpret this and the meaning. It's not just the player-character, of course, it's lots of characters in the game, who are all beckoned back and will have their own adventures and motives. We want the player to discover for themselves what that means and how they want to begin their adventure."

Stealth mechanics seem that will be present and may be useful in combination with backstab attacks, also the game may feature a night and day mechanic that may affect the stealth mechanic as well. Stealth as many are aware of, will allow the player to crouch, sneak, and hide behind tall grass to be less detected by the enemy. Stealth will play an integral mechanic in combat since you can use it to your advantage to sneak behind an enemy to instantly kill them or at least deal a large amount of damage from using a stealth attack. 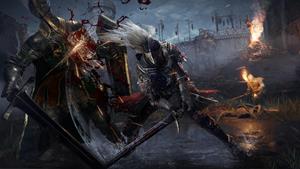 In the trailer that was revealed in E3 2021, we see a lot of unique Skills, magical abilities, and even having a horse leaping up a cliffisde, as well as attacking while riding your Mount. These are Skills that you pick up through the player's progression and exploration. There are some cases that a player can acquire a skill through purchasing it from merchants or learning them from an NPC, but during an interview with Hidetaka Miyazaki that was featured, he stresses out that in general, skils are hidden throughout the game's world, and it is the player's responsibiility to discover these through exploration.

Elden Ring will have complete freedom when it comes to building up your character, you are basically free to combine your Skills with different weapons and equipment, and you'll learn magic as well. Skills are freely interchangeable between a large variety of weapons as per Hidetaka Miyazaki, and that there are around 100 Skills. With having less restrictions, players will have even more variations of Builds that is even richer than previous Souls games.

Real-time changes are featured in Elden Ring in the form of the Day and Night cycle, as well as Dynamic Weather. These features also heavily affect gameplay, combat, and the world you are exploring. For example, in cases that you are romaing at night, both players and enemies will change in terms of aggression due to a decrease in visibility, and some special enemies that only appear at night will come out.

Covenants or Factions are a confirmed feature of Elden Ring. Elden Ring Covenants are player-chosen allegiances or pledges undertaken to specific deities or groups of NPCs. Based on previous titles, Players can expect their covenant to affect their gameplay by changing their Online interactions, or by creating new situations were users can collect special items or defeat certain enemies to rank up and obtain special rewards. Rewards are usually Magic, Weapons and Armor pieces.

Elden Ring will have a large scale in terms of the world and exploration, and to go hand-in-hand with this, some new mechanics are introduced such as jumping, yes players can jump now, as well as riding on horseback (Mounts). Hidetaka Miyazaki strongly suggests that you thoroughly search and explore every section of the world to find Skills that are hidden.

There are a number of choices as well that players can approach their way of combat, some may be brave and choose to go on head-to-head, while others would rather have allies such as being able to summon the spirits of deceased enemies. 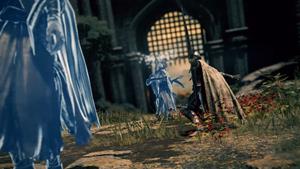 One of the combat aspects of Elden Ring is being able to summon Spirits that can help you in battle. These spirits are usually the fallen souls of the enmies that you defeat, and summoning them will have them assist you in combat. These are your offline summons, and it is quite different to have your friends or other playres summoned to your session which is available in Online co-op play. What's interesting with multiplayer is that you can even set a password on your calling marks, so that this way you can just have your friends join your session, if you're more comfortable with that rather than having a random drop in.

Accorting to Miyazaki, "|These spirit summons, we feel like – as well as there being a large variety to them – they're a nice collectable hidden element within the game world to discover and to equip as you go. They offer a lot of different strategic options, but also the player might find that they just like a certain enemy tagging along with them, a certain summon pleases them aesthetically. So there's a lot of strategic and a lot of personal touch to these summons. And we hope that players will also enjoy discovering their own progression elements as well."

There will only be ONE difficulty in Elden Ring. The decision of FromSoftware leaning towards this feature can benefit both new and veteran players of this genre. Elden Ring features a large scale when it comes to its world and exploration, so it does make sense that it really is up to you on how you want to tackle the game, it is highly encouraged that players carefully assess the situation that lies ahead and to find different ways to deal with it. This also provides a good camaraderie within the community since everyone can share their experiences and hopefully help one another.

Check out our other Wikis: