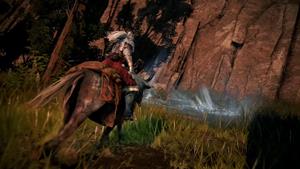 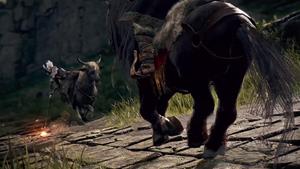 You can fight enemies on torrent as well. Weapons have different movesets when on horseback. The camera is independent to the direction towards the mount is moving, this gives the possibility to aim and perfom ranged attacks to any direction while the mount is running around, adding a lot of action and movement to battles. Performing a spell will slow Torrent down.

Although, Mounted Combat cannot be abused. The way some enemies fight makes Mounted Combat not always convinient. Mounts also need a lot of space to run around, meaning that in some scenarios it may not be the best idea to fight on a Mount. After taking enough hits, you will fall off Torrent, and will be susceptible to critical damage for a long period of time, so you must ensure you avoid enemy attacks. There are also mounted enemies that you can fight against.

Torrent excels against larger enemies with slower attacks. Your mount's attacks have a short delay to them, so timing is important. After attacking, you should continue moving forward, past the enemy, then turn back and repeat. This is essential because if you stay near an enemy for too long, they will attack and knock you off your horse. These attacks cannot be rolled through or blocked; instead you must use spacing and place Torrent so that they are away from the attack radius. Against hordes of weaker enemies, stick to the sides of the group and use your charged heavy attacks. If in the middle of a group. you will most likely be knocked off. Against ranged enemies, lock on to them then encircle them quickly so you can get closer whilst dodging their projectiles. Against enemies with faster attacks, it can be quite difficult, as getting close to them means you will probably get hit before you can attack. Against enemies that move faster or more wildly, it can be difficult to aim your attacks. In tight spaces, manoeuvrability is limited so it would be advised to proceed on foot.

You can fight bosses on Torrent, if they are open world field bosses. For example, against Flying Dragon Agheel or Tree Sentinel, horse combat is effective at dodging certain attacks that are harder to dodge on foot, and quickly racing in to punish their attacks.

If Torrent takes damage, he can be healed with Rowa Raisins, crafted from Rowa Berries. If torrent dies, you will fall off and be stunned for multiple seconds. In most cases, Torrent can be re-summoned, unless in a boss fight.

As reference, I will use the Playstation controls. Your R1 (light attack) becomes a short swing with your weapon to the right. Your L1 (guard) becomes a short swing to the left. you R2 (Heavy attack) becomes a charge attack on the right. This is good to initiate encounters with. This can be charged, and while it charged, It can also damage enemies. Your L2 (Weapon Skill) becomes the same attack as the R2 but on the left. These attacks use stamina but no FP (unless using a spell) . You can only attack with one weapon and it will be held in one hand, so weapons you can only hold whilst two-handing will not be effective on mount, and you would be better off levelling those stats so you can wield it.  As with regular combat, your stamina is not used outside of combat. 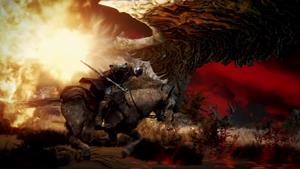